How can a mother behind bars bond with her child?

New Life Stories is giving imprisoned mothers a chance to connect with their children — through storytelling.

When does a story become more than a fairytale?

For Salimah Sukar, reading a story to her daughters was a step forward in her quest for a real-life, happy ending.

Salimah is no stranger to life behind bars. In 2010, she landed in jail for the third time for trafficking drugs, this time to serve a seven-year sentence.

Arrested before her children’s eyes, she would not see her youngest daughter, only 14 months old then, for about four years.

“She did not know who I was,” recalls Salimah, who was released conditionally in 2015. “She asked, ‘Where is mother? How does she look like?’”

“My older daughter (Ghaaziyah) showed her my photograph, but that doesn’t mean much, you see. It was very painful.”

In prison, she watched her fellow inmates become despondent from being cut off from loved ones, losing the will to turn their lives around. “People were released, and then they came back. They couldn’t cope,” recalls Salimah.

She feared she would become one of them — after all, she had failed to stay out of prison twice before.

But six months before her release, Salimah’s story took a turn: she was selected for a programme by non-profit New Life Stories, aimed at helping incarcerated mothers break the cycle of crime.

Set up in 2014 in Singapore, New Life’s efforts are two-fold.

Mothers due for release are selected for a programme that prepares them for re-entering society, through befriending and counselling.

Outside of prison, volunteers visit the women’s children once a week to read to them, improving the children’s language and social skills.

The volunteers also bring their mothers’ presence into their lives once more, by creating voice recordings of their mothers reading a story to them.

These recordings are then played to their children, and their responses are captured on video and shown to the mothers.

In this manner, storytelling becomes “an expression of the mother’s love”, says New Life Stories co-founder Saleemah Ismail. “To break down the prison wall. To make the wall invisible. So that mother and child can connect.”

Volunteer Volunteering to read to the children, and help improve their reading and social skills
Donate Support New Life Stories’ efforts to help incarcerated mothers and their children by donating to their cause

New Life began with 15 mothers in the first cohort; the third intake began in January 2018 with 30 mothers.

Watching her children’s progress over videos, Salimah felt something she hadn’t experienced in a long time; a sense of connection to her daughters.

With help from volunteers, she put her thoughts to paper, creating a story starring three of her four children, complete with illustrations. New Life published the storybook, and gave it to her children.

“This is where my pain slowly healed. Even though there isn’t any physical contact, at least I know what is going on,” she says. “From there, my strength (grew).”

For Ghaaziyah, who was living in a relative’s home, while Salimah and her husband served their respective sentences, her mother’s written words took her to a different place. “It reminded me of my mother, and that she was happy, as she got to write a book and send it to us.”

Staying clear of crime after her release has been a struggle for Salimah, as she remains haunted by her past. But having her children as her focus has helped her stay on the path.

Says Ghaaziyah: “I’m still so proud of her, because she faced her consequences, and she’s such a great mother.

“I think mothers and fathers can stop going back to prison if they are happy.”

Find out more about New Life Stories here, and support their work by making a donation or volunteering to read to the children.

New Life Stories is a non-profit in Singapore set up in 2014 to help incarcerated mothers and their children. It strengthens their bonds through storytelling and support programmes for both mother and child. Its first cohort had 15 mothers; it increased that to 30 in 2018.

VolunteerVolunteering to read to the children, and help improve their reading and social skills
DonateSupport New Life Stories’ efforts to help incarcerated mothers and their children by donating to their cause

Here are ways you can help New Life Stories

Volunteering to read to the children, and help improve their reading and social skills 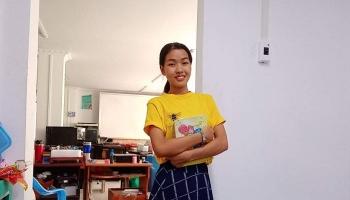 Beacon of hope in Myanmar