Do you judge when you see a child on the floor, screaming?

Singapore actor, Adrian Pang shares what he learnt on autism and what it means to us as a society.

Unless we’re directly involved, we see autism from a distance. We see it without clarity, distinction, or form.

As a team, we knew that going into the production Falling, we would be entering an entirely new world. We did as much research as we could. We spoke with many parents, siblings, and coaches of individuals with autism.

One parent told me that what she needed more than anything in the world was respite.

A moment of relief from the challenges of raising a child with autism. It’s something many parents with autistic children need.

We spent time at St. Andrew’s Autism Center interacting as much as we were able to with adults who had autism. It’s one of the few places that does offer some respite to the parents. But there is a limit to what they can do. About one-in-a-hundred people in Singapore fall into the spectrum of autism. One percent. It may not sound like a large number, until you start to break it down.

According to the Autism Resource Center in Singapore there are 50,000 Singaporeans with autism. Most of them, almost 38,000, are adults. With figures like these, there isn’t always room at St. Andrew’s to provide respite to all those families. What will this mean for the thousands of others without families to care for them?

Support Find out more about autism

Like the spectrum of autism, the solutions to the growing challenge of autism will be equally wide and varied. No single institution can solve it, there will be no singular approach that will work, and just like the parents, we as a society, need to prove ourselves strong enough, brave enough, and loving enough to open our eyes, minds, and hearts to the special ones amongst us.

It is easy to look at the behaviour of the autistic and immediately think the worst of them, to judge. One parent I spoke to ended up making cards to hand out to passers-by as they “tsk tsk”-ed their way past her son as he had a meltdown — usually caused by the overstimulation of crowds or loud noises. The card simply informed them that he was autistic and asked for their understanding.

The biggest worry these parents have is about how their autistic child will cope after they’re gone. Who will take care of them? Who will “love someone who is difficult to love”?

I feel our understanding, as a people, as a society, has to grow in order for there to be a place for the autistic in our world.

Learn more about autism and the prevalence of autism in Singapore.

Adrian Pang is an actor and the co-director of Pangdemonium, a not-for-profit theatre company and registered charity, which has performed plays tackling social issues from dementia to autism.

SupportFind out more about autism

Here are ways you can help Adrian Pang

Find out more about autism 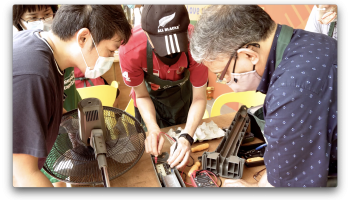