When a community of dads come together, the lives of families get uplifted.

“If I kill myself, will that satisfy you?”

Mohamed Aqil (Aqil) questioned his father, Mohamed Jamaluddin (Jamal), after a beating one day. That outburst was the tipping point for Jamal’s fathering journey.

“I thought that being a dad is being strict and I just have to control the household, put food on the table. That's about it. That’s why my children didn't communicate with me and most of the time they hated me so much,” recounts Jamal, a father of four children.

Having lived with foster families as a child, and learning to survive on his own, Jamal didn't know how to show love to his own children when he became a dad. He shares, “I was brought up in a place where I got all the beatings if I didn’t perform. I didn't get much love and felt very lonely. And the trust was not there.”

But that moment with Aqil, his youngest son, sent a jolt through Jamal.

“I felt so sad, so heartbroken. I started to think, ‘Is that right? My way of bringing up the children? Being a strict father, without giving out love?’ I was at a total loss actually. Nobody taught me about this. So I started to look for solutions on how to be a better dad.”

Jamal’s drive to change began when he was asked by the parent support group in his son’s school to attend a parenting workshop conducted by Dads for Life, a support group for dads in Singapore. An initiative by the Centre for Fathering, a non-profit organisation, Dads for Life was launched in 2009 to inspire, mobilise and involve fathers into becoming  positive influences in their children’s lives.

Bryan Tan, CEO of Centre for Fathering and Dads for Life, shares, “Fatherhood has evolved quite a lot from generation to generation. What used to work well for fathers has changed quite drastically for my generation.”

Recalling his personal fathering journey, Bryan didn't know how to be a dad too because he never had guidance on what it means to be a father in today's world, or much information on what a husband should be either. He didn't feel very supported, because he didn't know whom he could talk to with regard to these inadequacies.

“Dads for Life as a community strives to bring fathers in Singapore together, so that we start living life in community. We try to create as many of these safe platforms where men can be vulnerable with one another,” says Bryan.

The ICAN workshop, designed to equip parents with basic skills of Involvement, Consistency, Awareness and Nurturance towards their children, that Jamal attended was the catalyst for him to discover a new perspective of being a dad. He shares, “The trainer told us after the class to go home and give a good hug to our children. And when I did that, their faces were like, ‘Wow, is it my dad?’ They did not push me away and at that moment, I felt so good.”

Change was not easy for Jamal. It required tremendous effort and commitment, more so when it involved his loved ones. When Jamal looks at his family now, he is reminded of the hard work that is needed to be a father to his children and the husband for his wife.

“It wasn’t easy at first. In between I have anger arise. So I have to communicate with my spouse. I tell my spouse when I'm angry. I communicate a lot more with my wife about our children's lives.”

Now with a refreshed perspective and passion for being a dad, Jamal can often be seen either cooking up a feast for his family or jamming songs with his kids on his guitar.

When asked about Jamal’s cooking, Aqil comments, “I would rate my dad’s cooking 9.5 out of 10, because he cooks a lot, and I like his cooking.”

“Dads for Life has actually improved my life. My family life has also improved,” confides Jamal, “ There are many fathers who actually need guidance on that. I have received something good from Dads for Life, and I want to give something back to the community.”

A COMMUNITY OF SUPPORT

A key part of Dads for Life is the larger community, a band of fathers that engages regularly through events, activities and workshops.

Recounting the many fond memories of their parent-child bonding events, Bryan says, “We want to ensure that all fathers feel supported and more importantly, we hold one another accountable for the state of our marriage, for the quality of relationships that we have in our family.”

He adds, “Jamal inspires us, because not only is he doing so much for his family, he has gone into schools and his community to mobilise more dads to come up to eradicate the effects of fatherlessness and is doing his best to be a dad for life.”

In addition, Jamal also helps facilitate workshops for dads in prisons, and coordinates support group events for the various ethnic groups. But he believes that this is only the tip of the iceberg as there is more to be done.

“I'm still in a learning stage. Being a dad is a never ending learning pathway. There is always room for improvement from every angle for being a better dad and a good dad.”

None of this is lost on Aqil who now sees his dad as his hero.

“Because of Dads for Life, my dad is my good friend now. I love you, Daddy.”

About Dads for Life

Launched in 2009, Dads for Life is a movement in Singapore that seeks to inspire, mobilise and involve fathers into becoming positive influences in their children’s lives. It is an initiative by the Centre for Fathering, a non-profit organisation established in 2001.

Sign upPrepare yourself for parenthood by indicating your interest in Dads for Life’s workshops.
SupportLearn the skills of effective parenting with Dads for Life.

Here are ways you can help Dads for Life

Prepare yourself for parenthood by indicating your interest in Dads for Life’s workshops.

Learn the skills of effective parenting with Dads for Life. 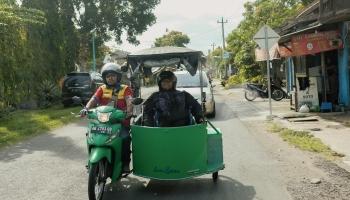 The ride to inclusivity