Rats hardly have the best reputation.

The most common species of rodent we know lives in sewers and other dark, dank places, reproduces every three weeks, feeds on rubbish, and carries all kinds of pathogens and parasites, which can spread diseases, some deadly.

Hardly anyone’s idea of a hero to be deployed into conflict zones to clear landmines, but when Belgian social entrepreneur Bart Weetjens was exposed to the problem of landmines during a trip to Africa, he recognised the rodent’s life-saving potential.

Bart had kept pet rats as a young boy and knew they were smart, trainable and had a sharp sense of smell. When he started thinking of ways to remove the deadly landmines, he arrived at the idea of teaching rats to detect them.

Rodents were widespread and light on their feet, and could thus reduce the dangers of landmine clearance and defray the high costs.

The rest is history.

A rat nose a landmine

In 1997, Bart founded non-profit organisation APOPO (a Dutch acronym that translates to Anti-Personnel Landmines Detection Product Development in English). Its mission: to research, develop and implement detection rats technology for humanitarian purposes, such as clearing landmines and detecting tuberculosis.

The African giant pouched rat was chosen for the brave task. According to APOPO, “they are calm, docile and easy to tame, relatively large, cheap to feed and breed, have a very well developed olfactory capacity, and able to live up to eight years in captivity.”

APOPO has its headquarters in Tanzania, and operates in Angola, Mozambique and Ethiopia.

In 2015, it sent its mine detection rats (MDRs) to Cambodia. It was the first time these HeroRATs, as they are affectionately called, were assigned outside of the African continent. APOPO partners with the Cambodian Mine Action Centre (CMAC) to support conventional demining teams. A visitor centre was also opened in Siem Reap in 2018, where the public can watch the HeroRATs in action and learn about the impact of landmines on local communities.

Cambodia remains one of the most landmine-impacted countries in the world. Most of the estimated 10 million mines were laid between 1979 and 1998, when the Khmer Rouge battled Cambodia and Vietnam troops. Since then, more than 64,000 casualties and 40,000 amputees (the world’s highest ratio per capita) have been recorded.

Despite collective efforts by Cambodian and international agencies to clear the minefields, millions of mines and unexploded ordnances (UXOs) remain on and in the ground, killing and maiming hundreds of civilians and de-miners every year.

“A landmine is a weapon that is designed to be put in the ground,” says Benjamin Carrichon, APOPO’s PR Manager. “The problem is that they remain active even after the end of the conflict.

HeroRATS to the rescue

HeroRATs are trained to develop sensitivity to the explosives found in landmines and UXOs. MDRs can search an area the size of a tennis court in 30 minutes. While a human deminer with a metal detector would need up to four days. A partnership of rat and human allows for 40,000 sqm of land to be cleared of landmines each week.

Says rat handler Chhorb-Sohum, “When I saw the rats for the first time, I thought they were nothing special. But after I work with them, I see their courage and action discovering landmines. I think they are great animals.”

Besides the physical dangers, the presence of these explosive devices have prevented Cambodians from accessing scarce land for agriculture, further impoverishing rural communities.

“The people affected by landmines cannot access their land, or they cannot farm, so it slows down the economy, because it reduces access to building structures,” says Benjamin.

The collaboration between APOPO and CMAC has been a success. In 2018, they cleared more than 1 million sqm of land, destroying 285 mines and other deadly devices, and improving the lives of more than 12,000 people.

Chan-Kosal, 38, village chief of O Romchek village “Before CMAC and APOPO came to demine here, our residents were living in fear of landmines.”

Nam-Chann, villager, says, “At that time, I was very afraid when I heard about it from other people because I am old. I am so happy that CMAC came to help us solve the problem. So I can walk safer.”

Rats assured, no rodents have been harmed while clearing minefields, as they are too light to set off the landmines. And for those concerned about animal welfare, according to APOPO, the HeroRATs “work as long as they are performing well, are happy and pass their weekly health checks.” Otherwise, they are retired, usually between seven and eight years old.

LET’S TALK ABOUT IT:
Do you know how else animals have been trained to help people in life-changing ways? Share your story here.

Launched in 1997, APOPO is a global non-profit organisation that researches, develops and implements detection rats technology for humanitarian purposes, such as clearing landmines and detecting tuberculosis. It has Belgian roots, with its operational headquarters in Tanzania, and projects in Angola, Cambodia, Mozambique and Ethiopia. For more than 20 years, APOPO’s scent detection rats have been sniffing out landmines, saving lives and returning land cleared of explosives back to communities for development to support their livelihoods.

Here are ways you can help APOPO

Adopt a rat and help speed up the clearing of landmines 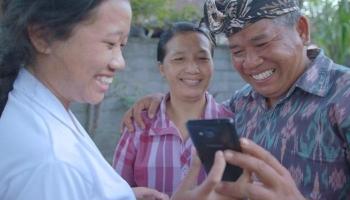 With GoodHood, kampung spirit is only a tap away