They've played tennis greats. Now they're aiming for the Paralympics. And yes, they're blind.

Hock Bee got to hit with Spain's Arantxa Sanchez-Vicario, a former world No.1 and multiple Grand Slam winner, in an exhibition match on the sidelines of the WTA Finals in Singapore.

Hock Bee held his own, and flew the flag high for blind athletes everywhere.

But for all his hot-knobbing with tennis greats (he's played Andre Agassi too - see below), blind tennis isn't in the Paralympic Games yet.

Hock Bee and his tennis-playing blind peers from across the world are trying to change that.

And the more support they get, whether it's virtual - such as following them online - or showing up physically when there are exhibition matches, or even contributing materially, the better the chances of them getting to the Paralympics.

Going entirely by the sound of the ball, these players have been smashing misconceptions about the blind. 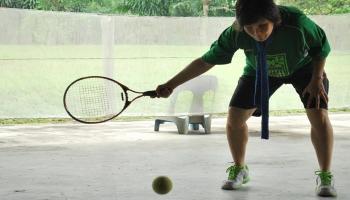 Volunteer Volunteer to coach, hit with them or help in other ways It was 2012 and Our Better World had just started.

We were looking for an inspiring story to tell.

It came to us wrapped in one of those “someone I know is doing something interesting” kind of moments: a group was teaching blind and partially blind people to play tennis.

How could we not check it out?

When we visited the place where they practised, I was amazed and humbled. This was clearly something unique and full of good.

We watched as volunteers in different parts of the room fed rattling balls to blind people with racquets.

Yes, the players mostly missed, but it was evident that they and the volunteers believed that hard work and persistence would eventually pay off.

The group's spirit and dedication was infectious.

We had to support them.

So Soundball Singapore became the subject of one of the first stories that we told.

Yet, as I looked around at the uneven and cracked concrete floors that they practised on, part of me wondered - even with their drive to succeed - how far they could go.

When we met them at Pathlight School, where they now train, we found Steady (the "chairman" in the video) and Hock Bee (in sun glasses), two players who featured in our first story, confidently wandering around the sports hall on their own.

They greeted us with such enthusiasm and it seemed like they were standing taller than I'd ever seen.

It was for good reason too.

Both players had progressed far beyond hitting balls thrown to them by volunteers. They were rallying with each other across the net.

In fact, they had become so good that when Hock Bee had the chance to take on Andre Agassi some time later, he could show the former world No.1 a thing or two.

Hock Bee and Steady are great examples of hard work and commitment leading to ability and confidence.

I could say the same thing about the group as a whole.

Soundball Singapore has come a long way, bringing a new sport to Singapore, and giving people whose paths probably wouldn't otherwise cross, an opportunity to connect, learn about each other, and aspire to achieve a shared dream.

And that dream has grown.

They want to introduce the sport to many more blind people and they're aiming to take them to the Paralympics.

Not an easy journey for sure, but one I'm glad that we can be part of.

Volunteer as a hitting buddy (no coaching experience needed) or coach, or help the group with building a website, marketing or getting the word out to blind folk to join in. Email them at [email protected].

Soundball is a social blind tennis club in Singapore that brings tennis to the blind by modifying the sport to their needs. Driven by volunteers, it uses sports to bring people of all abilities together, and improve the self-confidence those with visual impairments.

VolunteerVolunteer to coach, hit with them or help in other ways

Here are ways you can help Soundball Singapore

Volunteer to coach, hit with them or help in other ways

Finding the support you need as a caregiver