Keeping gibbons as pets? Not something to ape

The Gibbon Protection Society of Malaysia is working tirelessly to rescue gibbons who have been poached and kept illegally as pets, as well as to eradicate the rampant wildlife pet trade in Malaysia.

A NOTE FROM OBW: Our story featuring Gibbon Protection Society of Malaysia (GPSM) was produced and published in 2019. GPSM have since changed their name to Gibbon Conservation Society (GSM).

We have kept GPSM's name unchanged in our video and text story, as per date of publication. The links to support this cause lead to Gibbon Conservation Society's website.

For thousands of years, the Malaysian rainforest has been the stage for one of nature’s greatest concerts. Where sunrise is welcomed by the songs of the gibbons, the most vocal and acrobatic of all primates.

“When I hear gibbons sing, I feel very proud to be a Malaysian. Sometimes I want to take a video with my phone, but I end up not doing it, just so that I can enjoy their singing,” says Bam.

Mariani Ramli, known as Bam to her friends, is a Malaysian conservationist and the founder of the Gibbon Protection Society Malaysia (GPSM), the only NGO in Peninsular Malaysia dedicated to conserving their resident gibbons.

These fascinating apes are monogamous and mate for life. Singing is their way of marking their territory, celebrating their union, and eventually as the juveniles mature, a way to find a mate.

But these very songs are also what put them in grave danger; poachers follow their songs to target juvenile gibbons for the wildlife pet trade.

A species in danger Poaching for the wildlife trade, along with habitat loss, is the principal threat pushing gibbons and other Malaysian species onto the endangered list.

Thus, the demand for cute animals as pets continues fuelling a trade that sees gibbons die at every stage, from poaching to transporting a sale.

“Poachers only aim for the juveniles because they’re easy to tame and make into pets. Gibbons are special compared to other primates, each member of the family would die protecting each other,” Bam explains. “When the poachers try to get the baby, their father would be the first to get killed, then the siblings would get shot, and lastly the mum.”

The average size of each gibbon family consists of four individuals. So for each juvenile that is targeted, the other three family members will be killed first. The gibbon, who will be clinging on to their mother, may also not survive the fall to the ground tens of metres below. Studies estimate that only one in three survive the impact.

And to avoid being caught by authorities, poachers move the gibbons like cargo — in boxes which often go into the cold cargo holds of buses for hours. Bam shares that only one out of 20 are estimated to make it to the buyer.

According to Bam, the grim reality is that for every gibbon that has become a pet, 239 other gibbons will die along the way. The odds are also highly against the surviving pet gibbon. Bam shares, “The buyer will not know how to care for them, and gibbons which are less than two years old, will likely die.”

A sanctuary of hope 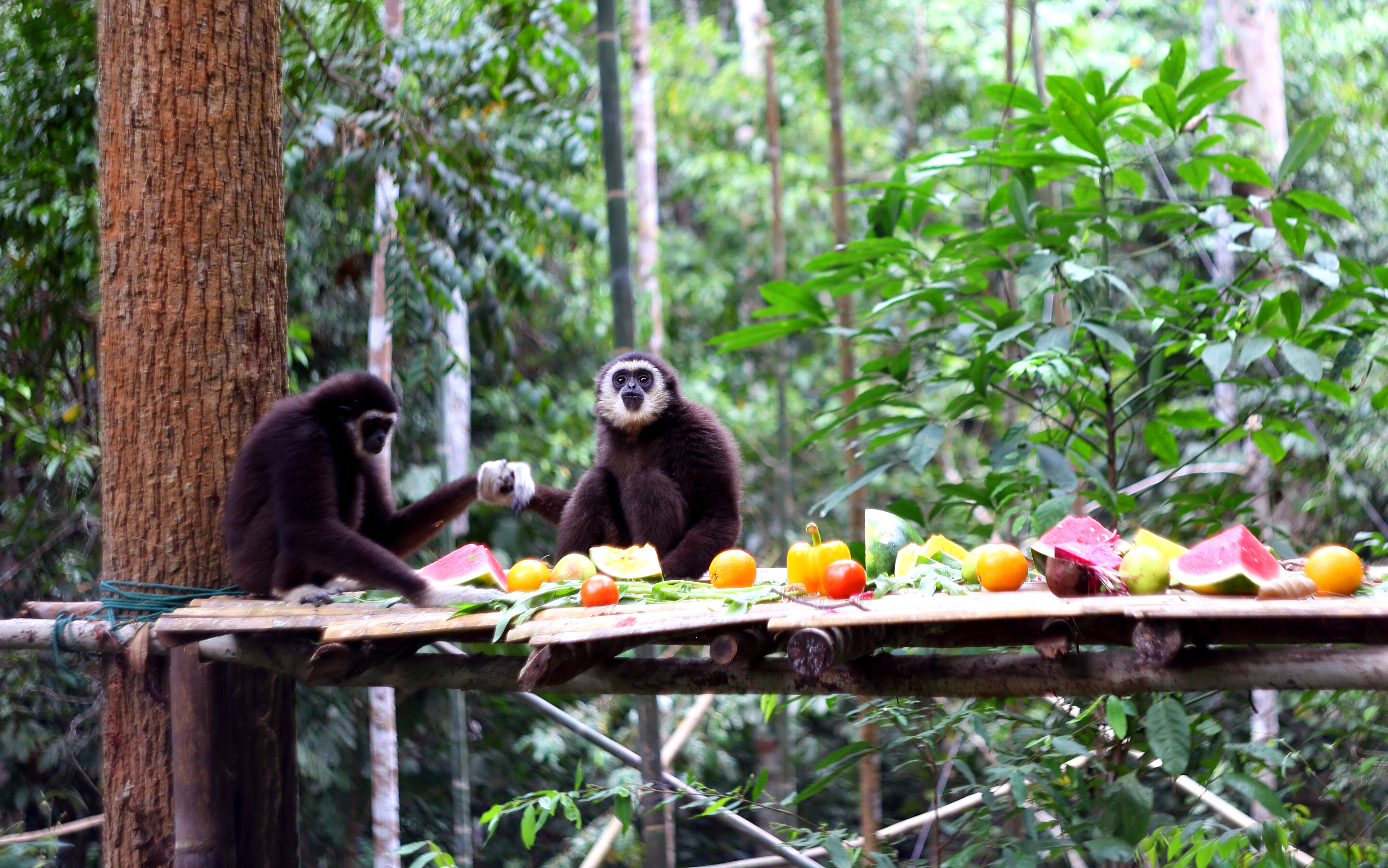 Bella is one of many young gibbons who had been targeted for Malaysia’s illegal pet trade. When Bam first met Bella, she was about three months old with open wounds on her arm and the back of her head, likely sustained when she was seized by a poacher from her mother, says Bam.

Fortunately for Bella, authorities managed to rescue and confiscate her from poachers, before passing her to Bam. At just a few months old, Bella was in need of urgent physical and emotional care.

“Gibbons below the age of two are at a critical age, we have to be very close to them like being a foster mom, giving them the will to live again after the trauma they've been through. I had to wake up every two hours to give her milk in the middle of the night, and care for her meticulously because baby gibbons can die easily,” recalls Bam.

Bella was treated at the GPSM’s secret sanctuary, which Bam created in 2013 to rescue and rehabilitate gibbons who were victims of the illegal pet trade.

Today Bella is four years old and fully recovered from her wounds thanks to Bam’s efforts. She has even developed her own healthy personality.

Bam says with a smile, “Bella is like a kid that's very naughty. Very naughty and very smart, loves to attract attention, loves to be pampered. She has her own character.”

Along with Bella, there are currently ten gibbons at the sanctuary. All victims of the wildlife pet trade and in need of critical care and rehabilitation so that one day they can be released back into the wild.

Bam explains, “Rehab work like this needs a lot of time, lots of commitment, lots of patience, and expertise. We also need finances as gibbons need care in terms of food and medical supplies”. It costs RM140 (US$34) a week to feed a gibbon.

Bam recruits volunteers to help out at the centre, where they provide day-to-day care, mental enrichment and scientific observations of the gibbons. All of this is managed carefully to avoid creating too much human exposure for the gibbons.

Each gibbon requires at least five to ten years of rehabilitation, which includes Bam trying to pair them with a mate and getting them to breed, before releasing them into a safe and protected forest. While the centre is a refuge for rescued gibbons, Bam is intent on addressing the very nature of the threat itself — poaching and the public demand for gibbons as pets.

“Where there is a demand, there is a trade, so we have to stop the demand to stop the trade,” says Bam, who hold talks in schools and other public spaces.

“Conservation won’t be complete without the help of the public. I place importance on working together with everyone,” she says. For example, “if one sees ads selling baby gibbons, they should report the ads to the authorities or share it with the society so that we can take action.”

Bam has recently been given government authority to expand her rehabilitation centre. With more gibbons out there in need of rescuing, Bam will face growing challenges. But she remains motivated by her desire to want the best for Malaysia’s singing apes.

“I had to give up my life, I've moved around just for their comfort. But all of this is so worth it when I see their progress, and it will be so worth it when one day, I see with my own eyes Bella released to the jungle with her family.”

She adds: “In the long run, I hope GPSM will not be needed anymore because at that time there will already be awareness in the public, and we no longer have gibbons that need to be rehabilitated. That is my dream.”

LET’S TALK ABOUT IT:
What can we do to keep gibbons in the wild?

The Gibbon Protection Society Malaysia (GPSM) is a Malaysian NGO founded by Mariani Ramli (Bam), the only one in Peninsular Malaysia dedicated to rescuing and rehabilitating gibbons who were victims of the illegal pet trade. Through personalised training, GPSM helps each individual overcome their trauma, relearn their natural behaviour and prepare them for life in the wild. GPSM also carries out outreach programmes to educate the public about the threats gibbons face in Malaysia due to human activity, as well as conservation activities and vital research on primates and their habitats. It also helps combat the growing illegal wildlife trade by assisting local enforcement agencies.

Here are ways you can help Gibbon Protection Society Malaysia

Swing over to GCS’s project site to help with rehabilitation 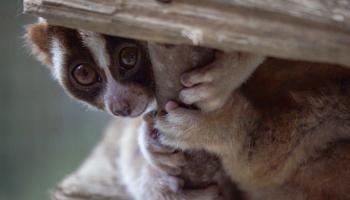