Siti Nur Yasyfa (Nur) is a 16-year-old girl who has spent much of her growing years on the streets of Jakarta, Indonesia.

Coming from a low-income family, she spent most of her time with the children in her neighbourhood and when they started begging on the streets, Nur did the same without the knowledge of her parents. Something she’s not proud of now.

“It wasn’t pleasant and I was embarrassed to be begging,” says Nur.

Nur’s parents did not want her to be on the streets. So when they saw that she was spending more time wandering the streets and getting into brawls, her parents decided to send her to Kampus Diakoneia Modern Foundation (KDM).

KDM, a non-profit organisation established 50 years ago, started with assisting and housing people with disabilities, those living with mental health concerns, as well as the elderly. But decided to turn their focus to children in 2000 when they saw an alarming growth rate of street kids in Indonesia. In 2018, the Indonesian Social Affairs Ministry reported that there were close to 17,000 children living on the streets across the country.

Poverty is notably the main reason why children wind up on the streets. Based on a 2020 UNICEF study, over 12 percent of 80 million Indonesian children live below the national poverty line. So unsurprisingly, some kids end up begging on the streets for survival.

“One person on the street could approximately earn 80,000 to 160,000 (Indonesian) rupiahs (US$6-US$12) in a day which could be equal to or more than the minimum wage,” shares Sotar Sinaga, the Executive Director of KDM.

He also explains that for some, being a street child has been in their family for generations; something that their parents and grandparents would have done their whole lives, making this break in pattern more difficult.

So KDM started reaching out to children on the streets and identifying those in need of help. Providing marginalised children with a safe place to live, basic necessities like food and clothing, and an alternative education program that allows them to develop their knowledge based on their interests. In the last 5 years, KDM has helped 1,261 street children, aged 2 to 19 years old.

However, adjusting to the more structured environment that KDM provides can be difficult for a street child.

Nur admits to running away from the KDM home several times for the freedom of the streets. But a family tragedy involving her brother stopped her in her tracks.

Like Nur, her brother had been sent to KDM but ran away to be with his friends on the streets. Whilst begging at the nearby train track, he fell as a train was approaching and didn't manage to escape in time.

“We used to be really close. Whenever my friends bothered me, my brother would defend me,” recalls Nur, “but he’s not around anymore.”

Shaken by the tragedy, her father insisted on her staying in KDM to keep her safe.

Nur finally decided to give KDM a chance and quickly learnt that KDM could provide her with opportunities and new life skills.

“I have learned to do things that I couldn’t do before,” she says, “such as cooking and studying independently.”

KDM not only helps and teaches children, they also encourage them to think about what they can do for others.

“As part of our education program, we also ask them to recognise what others need,” says Sotar, “our motto is ‘take what you receive now so you can give it back later.’”

KDM explores different ways to provide opportunities and instil values in the children under their care. One such way is through sport. Futsal is a popular sport among the children in Indonesia. Seeing this as an opportunity to encourage the children to believe in themselves, KDM began collaborating with local communities to send a team to the 2022 Street Child World Cup in Doha, Qatar.

The Street Child World Cup is an event that brings together street children from across the world to take part in a football tournament that aims to raise awareness of homelessness among youths, as well as to remove stigma about vulnerable children who live on the streets.

In 2014, KDM sent a mixed boy-girl team to represent Indonesia and placed 8th in the tournament. This year, they will be sending a girls team, in which Nur is on track for being selected.

“In 2013, we learned about how sports can be used for intervention,” says Sotar, “we reached out to 150 girls in Indonesia this year through this football program.”

Giving the children, especially girls, this opportunity through football not only empowers them, it also gives them the chance to develop their interests and have their own aspirations for the future.

Nur now has big life goals. Having learned about children’s rights and the right for education at KDM, she aspires to meet other children from the streets and share her experiences with them.

“I’d like to be a teacher,” she says, “someone the children can look up to.”

“I also want a better life so that I can help my father who has a lot of responsibilities,” she says, “and I have written reminders for myself to not go back to the life I came from.”

Kampus Diakoneia Modern Foundation (KDM) is a Indonesian non-profit organisation dedicated to child protection and fulfilment of children’s rights by providing them with housing, food and informal education. They create an environment that fosters growth and development while ensuring that every child feels safe and comfortable. They do this to allow each child to bring out their best potential.

Here are ways you can help KDM 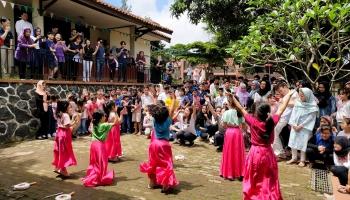