Arts and music the path to mental well-being for children

When schools shut across India as part of a national lockdown in March 2020, due to the COVID-19 pandemic, one NGO jumped at the chance to turn disaster into opportunity.

Based in Chennai, the southern capital of Tamil Nadu state, NalandaWay Foundation envisioned that thousands of school-going children stuck at home for an indefinite and unforeseeable future would start to feel anxious and restless. This would in turn affect their mental health.

NalandaWay’s solution was to use its knowledge and expertise in arts-based education to provide children, young people and even parents and teachers with ways to cope during these uncertain times.

One of the non-profit’s interventions targeted 15 and 16-year-old students who were meant to be taking their 10th grade school-leaving examinations, which were postponed or cancelled. NalandaWay partnered with the Tamil Nadu state government and UNICEF to devise a programme that would reduce the stress of students who were stuck in limbo.

Since a majority of the children were from marginalised backgrounds and did not own smartphones, NalandaWay could not rely on delivering this initiative via online platforms. Instead, it worked around this challenge by utilising the country’s Voice Response System, which allowed students to ring a toll-free number that would automatically return their call.

Upon answering the phone, students listened to a new recorded story lasting up to six minutes each day over 30 days. The narrative revolved around characters of the same age who experienced similar challenges. Through the art of storytelling, young listeners picked up ideas and strategies on how to cope with mental health issues and completed accompanying exercises after each daily recording.

Founder Sriram V Ayer says more than 30,000 students participated in this programme, called Take It Eazy. One boy, in particular, was so dedicated he would wake up at four in the morning to borrow a neighbour’s phone. A child labourer, he listened to the stories every day, and completed the exercises before heading to work at six.

“This is a kid who can’t speak English, but was suddenly talking about locus of control or being mindful and journaling. I was really touched,” recounts Sriram. “We were able to create something interesting and innovative that a child with no access but [plenty of determination] found a way to use the resource for his own benefit.”

Another COVID-19 response was to launch a set of guides called Art for Wellbeing - A Parent’s Guide, to reach out to children aged three to 15, as well as their caregivers. Sriram explains that the guides were a way to help them express their fears, deal with emotions and build a circle of safety. The guides were so popular they have been translated into 16 languages, including local, and foreign languages, such as Vietnamese, Malay, Bahasa Indonesia, German, Italian and French.

Sriram attributes his connection to the Singapore International Foundation’s Arts for Good (A4G) Fellowship programme as crucial to expanding the reach of these guides beyond India. A4G aims to enhance cross-cultural understanding and its network of fellows in Asia rallied around NalandaWay during the pandemic to translate the Art for Wellbeing guides.

“It was remarkable,” says Sriram. “We are actively looking at how to serve populations of young people in disadvantaged neighbourhoods in our respective countries through shared arts-based resources.”

ART AS HEALER OF SOCIAL DIVIDES

Our Better World told the story of NalandaWay Foundation in November 2018, garnering nearly 730,000 views with more than 2,320 actions taken. The focus of the video was on the Foundation’s Chennai Children’s Choir.

Sriram says the video was successful in presenting NalandaWay’s impact in a unique way and is used as a tool to engage with donors and communities: “The OBW story looked at NalandaWay from the point of bringing children from various castes and religions to come together [through music]. It was not an angle that we had thought about.”

Since the video was published, NalandaWay has expanded and deepened its scope of arts-based learning and intervention programmes. It has also increased its ability to impact more children by working with local and international NGOs in different parts of India.

“In 2019, we realised that we needed to widen our footprint across the country. But that we would not be able to deliver a lot of these programmes ourselves. So strategically, we decided to partner with different organisations in different parts of the country and around the world,” says Sriram. “We provided the expertise, experience, resources — lesson plans, curriculum, to these organisations, which allowed us to scale our initiatives in other areas.” COVID-19 has thrown a pall over NalandaWay’s efforts to keep children from low-income families in school. Many have been forced to return to work.

“We see many of our own young people, 14, 15-year-olds, leaving school and getting back to work, which is heartbreaking,” bemoans Sriram. “A lot of them are struggling because 90 per cent of their parents have lost their livelihoods. They're in informal sectors and a lot are dependent on unskilled work, and working in shops and commercial establishments that were shut.”

With many schools switching to online, video-based learning, children from marginalised communities were unable to continue accessing an education from home. Sriram explains that they either did not own the technology or could not afford to pay for internet data.

“We had to quickly find alternative methods to reach these children directly,” he says. “So we put together home learning kits, focusing on three objectives. First and second is to engage them in learning English and foundation arithmetic and numeracy. Third is using art for well-being.”

The kits were created for students aged four to 10 years old. To date over 34,000 children in Chennai, Coimbatore, and Delhi NCR have received the kits in a bag containing stationery, art materials, a set of plain notebooks and an Art for Wellbeing workbook. Sriram says that NalandaWay will continue to produce these kits with support from the public, even after March, when schools are expected to reopen. Each kit costs Rs400 (US$5), and online donations are accepted.

“Sometimes, disasters provide an opportunity for us to rethink how we want to approach our communities and how we want to work, providing clarity. It [the pandemic] has also given us a set of resources, brought new people together, increasing skill sets and competencies. All of which we may not have achieved this soon [if not for the pandemic].”

NalandaWay Foundation is a non-profit from India that provides free arts programmes to children to bridge social divides, while giving children from disadvantaged homes a means to express themselves. It is a key partner of Singapore International Foundation’s Arts for Good Fellowship, which fosters a community of practice that harnesses the power of arts and culture to create positive social change.

DonateSponsor learning kits at Rs 400 each (US$5) to help students with limited access to technology keep up with their studies at home.

Here are ways you can help NalandaWay Foundation

Sponsor learning kits at Rs 400 each (US$5) to help students with limited access to technology keep up with their studies at home. 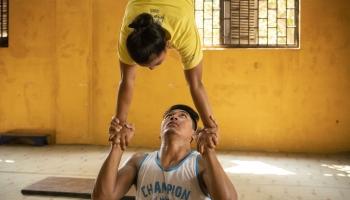