Christmas — it's known as the season of giving. And with that comes associations of love, compassion, joy and generosity.

As I walked along the streets of Orchard Road one evening, aglow with shopping malls blanketed in festive decorations, I saw throngs of people caught in the frenzy of Christmas shopping.

Outside the malls along the pavement, people snapped shots of the dazzling Christmas lights dripping from towering trees.

Among the bustling crowd were two people with cerebral palsy in wheelchairs, a couple of hundred metres away from each other, selling tissue paper and festive trinkets.

At one traffic light where the crowd stood, impatiently waiting for the lights to turn green, a middle-aged man in a wheelchair, his face twisted and frozen into an awkward expression by cerebral palsy, raised his right hand, grasping three tissue packets for sale.

Around him was a largely indifferent crowd, chatting loudly, pulling out their cameras, making full use of the minute-wait at the traffic light to take more pictures of Christmas in Singapore.

In that moment, he was invisible. Like the many buskers who sing their hearts out; the students holding charity tins selling flags; the elderly auntie weaving through the food court selling packets of tissue paper.

As I walked on further, I saw two buskers who drew a more substantial crowd — one, an athletic, good-looking man using four circular discs to mesmerise the audience with his tricks, to the rhythm of trance-like music.

Another, a duo in blue, skin-tight leopard-print leotards doing acrobatic acts. It was clear to me that they earned more attention and money than the two men in wheelchairs I had seen earlier.

On 4 December, a day after Giving Tuesday, The Straits Times applauded Singapore for climbing from 114 out of 146 countries in the World Giving Index last year to 64 out of 135 countries this year.

But only 24% said they had helped a stranger in the past three months, the same as the year before.

Come Christmas season, many of us may contribute to the Salvation Army, write cheques to charities, maybe even volunteer our time singing carols at a day-care centre for seniors or participate in a food distribution drive.

In our increasingly socially-conscious society, we buy cards made by people with disabilities, cookies made by single mothers or throw parties at F&B social enterprises.

But when it comes to stopping for a stranger in need at the sidewalk, to say hello and ask if they'd like something to eat, many of us would shy away. At best, we may manage our own awkwardness by dropping some coins in the box before hurrying off.

At that traffic light on Orchard Road, I thought of how we choose to give: buying branded goods, expensive Christmas hampers and gift vouchers. And whom we choose to give to: business associates, people with potential networking opportunities, friends and family from our own social class.

When we got home, my husband, Cliff, seeing that I was noticeably sullen, asked if I was okay.

Putting a bowl of home-made brown rice porridge into the microwave, I didn't answer him.

On the way back home, Grandpa Zhou, an elderly busker who plays the harmonica by the train station near our home three days a week, told us he hadn't had dinner when we said our usual hello and asked if he needed anything.

Cliff and I asked if he was hungry and if he would like a warm take-out of Chinese rice or a bowl of home-cooked porridge I had cooked just for him over the weekend.

He said he only wanted the porridge if we could heat it up for him right now. Having had a bit of a long day, and feeling disconcerted by the sights along Orchard Road, I was grumpy.

As I heated up the porridge at home for Grandpa Zhou, I finally answered my husband: "No, I'm not really okay."

To be honest, I felt a little taken for granted.

"I go to the extent to cook him balanced nutritious meals now so he doesn't have to eat take-out or bread all the time and he asks me to heat it up for him now?"

Grandpa Zhou turned from a stranger to a friend about five years ago, starting with a hello and a packet of Chinese rice.

He had become a dear friend, playing his harmonica at my birthday gatherings and our wedding.

"He only got bread dropped off from passers-by and he doesn't like bread. He's probably wolfing down your porridge right now. Good job."

I was ashamed at my own self-righteousness, embarrassed about my judgement of Grandpa Zhou. Did I really love him as a friend? Was I really sincere about meeting his needs, or did I only offer my help when it was convenient to me?

As I pondered over the evening's events, I wondered to myself if perhaps next year, we could, as a nation, not only give our time and money, but also help strangers directly.

It's as easy as stopping for a once-invisible someone, giving him more than loose change — a hello with a smile, and asking a simple question: "Is there anything you need I can get for you? A drink or something to eat?" 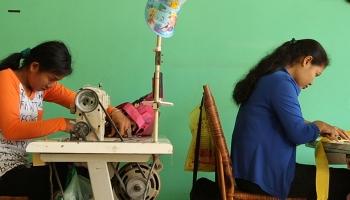 'I'm not here to change the world'