You are reading: Compassion Fatigue: A mental health caregiver's story 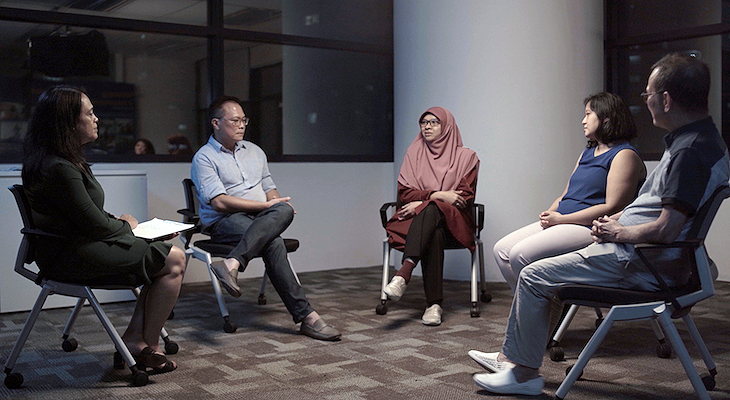 Through an NGO for mental health caregivers, a group of them finds solidarity and support by sharing their journey publicly for the first time.

Caring for a loved one with mental health issues can be challenging, especially when the person is not equipped with the relevant skills and does not have a proper support network. Founded in 2011, Caregivers Alliance Limited (CAL) supports caregivers, by empowering them through skills-building as well as emotional and peer support groups. In a rarely seen, often closed-door support session with four caregivers, we hear from them and understand the challenges that caregivers face and the support they have received as they help their loved ones.

“I was full of self pity. I kept asking, ‘Why?’ Why this, why me, why my family and why is she going through all this?’” recounts Gabriel Chan, a father and caregiver to his daughter who suffers from depression

Depression is also known as major depressive disorder (MDD), which is a profound and pervasive feeling of sadness, emptiness, worthlessness and hopelessness that affects both body and mind. MDD is a common mental illness in Singapore, with 1 in 20 people having experienced it at some point in their life.

Gabriel was sharing his personal struggle for the first time in a group session with four other people he had not met before. One of them is a facilitator. The rest, like him, are caregivers of loved ones with mental health issues, and they each face struggles in coping with the intense pressures of caregiving. From dealing with stigma, to being burnt out, there are thousands of other caregivers like them in Singapore who encounter daily challenges, which in turn impacts their own physical, emotional and mental well-being.

This is the motivation for the peer support group that Gabriel was in. Each of the four participants have been involved in past sessions which were organised by Caregivers Alliance Limited (CAL), a non-profit founded in 2011 to meet the needs of caregivers, especially those who are not equipped with the relevant skills and proper support network.

These sessions are part of the Caregivers-to-Caregivers (C2C) programme

C2C is a fully-funded, 12-week course for caregivers of persons with mental disorders. Participants learn about mental health conditions and the brain, as well as treatments and their effects. It also teaches participants how to communicate with a loved one who has been diagnosed with a mental illness and to understand recovery and resilience.
Find out more , which has supported almost 5,000 caregivers in Singapore to date, where caregivers find solidarity and support amongst each other, as they share their experiences and journey.

The stigma we face

Faiza Sanip, a mother and caregiver to her son with schizophrenia

Schizophrenia is a disorder characterised by major psychosis (e.g. delusions, hallucinations, disordered thinking or abnormal behaviour) but also deficiencies in mental functioning such as impairments in attention, poverty of speech or lack of emotional response.

She shares, “During the course of going for treatment, we also received feedback from family members who came up to us and said, ‘You sent your son to the hospital? You don't have to do that. Just talk to him. You know, and talk him out of it. Maybe you didn't talk to him enough. Maybe you were so busy working.’ So, a lot of blame that we felt was directed towards us as parents.”

According to CAL, the root of stigma often lies in ignorance and, for certain societies, in superstition. While an increase in public awareness and education will help over time, mitigating stigma requires a societal shift in perspective and individual effort.

Richard Ashworth, who takes care of his 87-year-old adoptive father with dementia

Dementia is a group of syndromes that affect the brain and are characterised by progressive global deterioration in intellect, including memory, learning, orientation, language, comprehension and judgement.

Sources: DSM-5, Health Promotion Board, Institute of Mental Health, NCSS , recalls a trying moment at a supermarket, “My father is in a wheelchair. We were pushing him around to do shopping and suddenly he passed motion. It was on the floor everywhere. I was panicking. The upsetting part was the cleaner, with all the equipment he had, refused to help.”

Caregivers often internalise the overwhelming feeling brought on by being stigmatised by society, making it harder to provide the care that their loved ones need.

The self-acceptance we need

Borderline personality disorder is an illness marked by an ongoing pattern of varying moods, self-image, and behaviour. These symptoms often result in impulsive actions and problems in relationships.

“There are so many layers to it because as a sibling, I've had my sister say to my mom, ‘Why does Nadia get to have a normal life? Why does Nadia get to go out and have friends and have a career? And go for parties and all,” says Nadia. “Every time I have a milestone, my sister gets affected to a point where she will have a breakdown and we have to let her time-out for a couple of weeks in the hospital.”

As feelings are very complex and differ from person to person, CAL emphasises the importance for caregivers to recognise what they are feeling and to understand why they feel the way they do. According to CAL, this is crucial for decision-making and how they behave. For instance, being able to talk to someone can help put things into perspective and boost resilience in handling setbacks.

Faiza recounts a moment of truth in her caregiving journey: “I have a very good friend who is a doctor and I told her my son has schizophrenia-like symptoms. She told me, ‘No, you gotta stop this. He has schizophrenia.’ And I cried for two days after that, because it was hard to gather courage to move forward. If I didn't accept that first, how am I going to help him?”

Gabriel also shares that it took him a lot of courage to talk about his daughter’s attempted suicide. “We didn’t share with our relatives, because I didn't want to hurt my parents. And I don't think my friends will understand. Imagine [nearly] losing your daughter at 17 years old.”

The burnout we endure

“Every time my daughter has an episode, we will all be going into our little rooms, to find out how to get her back out of that situation. We will be so stressed, frustrated and depressed,” says Gabriel. Even when she's feeling better, you still wonder, ‘When is the next episode? How do I prepare for it?’.”

Dealing with aggressive, chaotic and self-harming behaviour from a loved one can be traumatising for caregivers, according to CAL. Moments like these can cause relationships to deteriorate if caregivers do not seek help.

“Caregiver burnout is real because I have been diagnosed with depression. So I'm having to learn to take care of myself too,” says Nadia. “It feels like there is no end. And as much as our lives have been affected by my sister's illness, we still love her. There are many days where I want to just tap out.”

Notes Richard, “At the beginning, I wanted to kill myself because I could not cope.” And it can be disorienting when his father’s violent behaviour is mixed with moments of tenderness.

“Most of the time my father starts scolding me or screaming and shouting. But at times, he tears up and he thanks me, and holds my hand very tightly. That inspired me [to] continue taking care of him.”

The support we seek

As the group session comes to an end, these participants reiterate the benefits of the C2C programme, which has uplifted them and given them the strength to continue their journey as caregivers. No longer isolated, the guidance has offered hope and resolve to not only be more effective in their caring of loved ones, but also to offer a community to turn to in times of need.

Richard shares how his experience with his father has motivated him to continue to help other caregivers even after his father passes away. “This is my mission,” he says. “I see how caregivers suffer mentally and physically. I want to help other people.”

Reflecting on her experience after participating in CAL’s C2C course, Faiza says, “The 12 weeks was a journey for me to become self-aware, self-accepting of my son, his condition and what we can do as parents to be there for him.”

Nadia adds, “I wasn't going to let this take over my life anymore. I wanted to regain control of the situation and attending the C2C course gave me that. The journey never ends, but CAL has allowed us to find each other.”

Caregivers Alliance Limited is a non-profit organisation in Singapore dedicated to meeting the needs of caregivers of persons with mental health issues through education, support networks, crisis support, tailored services and self-care enablement.

Find out more about the Caregivers-to-Caregivers (C2C) programme, a fully-funded 12-week course for caregivers of persons with mental disorders.

Take Survey
How you can help
Prev
Story