These young survivors of the Kelantan flood have an urgent message for you - delivered in traditional Michael Jackson fashion.

My first recce trip to Bertam Baru in Kelantan felt so surreal.

Standing on a bridge, taking photos of a river far below and being told that during Malaysia's great flood of 2014 the water had risen to the top of a streetlamp next to where I stood, was an encounter which is hard to put into words. "Flood" does not seem adequate to describe it - it seemed more like an inland tsunami had hit this community.

The first time we met the Anak Seni Bertam dikir barat (traditional Malay choral singing) kids, it was in a low-lit community hall in the middle of Bertam Baru village.

They formed a line and greeted us with a warm salam, a two-handed handshake, and a dakap, a soft bow with which their foreheads met our hands.

It was a truly touching gesture.

The dikir barat performance which followed was nothing short of mesmerizing.

What I mostly took from that night was the look of hope and pride in the eyes of the villagers who came out in droves to witness their show.

I had an idea to use Michael Jackson's Heal the World and have the kids perform the song using the traditional dikir barat form.

Since most of them didn't speak much - if any - English, I knew it would be very difficult.

It came as a bit of a surprise to me that the kids and their adult mentors did not flinch one bit when I posed them the challenge.

They worked hard and came up with an original adaptation of the verse, and learnt to sing the chorus in English over traditional rhythms.

I saw in them an inner desire to communicate their devastating experience to the world.

On the day of the recording, it was scorching hot, which during that time of the year, meant that heavy storms were to follow in fast and furious fashion.

We had chosen a nearby river bank to set up the stage. It began to drizzle as we prepared the outdoor shooting location. Google told me there would be a storm in 40 minutes. All in all, a filmmaker's nightmare was unfolding.

We began with a couple of warm-up takes. The performers and crew eventually found their rhythm and we managed a couple of "proper" takes.

But there was no spark.

The mentors gave their pep talk. An assistant brought roti canai (a popular Indian bread) and snacks to boost morale.

But still there was no magic.

Large grey clouds hurried across the skies, casting shadows in the middle of our takes. Winds blew so hard they caused the microphones to pop.

The singers began to falter and forget their lines. I was prepared to abandon the shoot and pray for a better day the next morning.

Then Razak, the co-founder of Aidhome, which helps survivors of the flood to get replacement homes and educates the children to respect the environment, gave a speech like Bill Pullman's US president in Independence Day.

Everyone sat up and took deeper breaths. Focus returned. Even the sun came out.

We rolled. And we had the best take all day.

I yelled cut and almost called a wrap for the day. But out of habit, we checked the equipment before calling it. Alas, a sound recorder had run out of juice midway through the last take.

Everyone, except the kids.

It was clear that if nothing else, the flood had taught the kids how to overcome setbacks.

We saddled up for another take. Clouds joined us to make it slightly overcast, giving the cameras better light to work with. The winds took a break, so sound was crystal clear.

And the kids, well, they released all their pent up energy into the take, and it turned out to be even better than what we had hoped for.

It was finally a wrap.

I'm very proud of how this project turned out and I learnt a lot as well. Seeing how the kids could return to their football, cycling, hanging out and playing dikir barat after the flood, reminded me about resilience.

They barely got away with their lives and they have so much to rebuild - things most of us take for granted like a home, a school, our favourite coffee shop.

But they taught me about being in the moment and appreciating what you have, even if it's not very much.

I hope they continue to pursue their dreams, however big or simple they may seem.

Most of the kids want to be soldiers, firemen or policemen.

What it sounds like to me, is that they all want to be useful members of society. To not be helpless; to fight for a better environment; to be able to help others like they were helped during the flood; to stop it from ever happening again.

I hope we all play a small part in enabling that.

Along with providing affordable and eco-friendly housing to the flood survivors, Aidhome focuses on the development of the children in the flood-hit communities. You can volunteer with Aidhome to teach eco-education (edible gardening, alternative energy, recycling), English, math and performing arts. 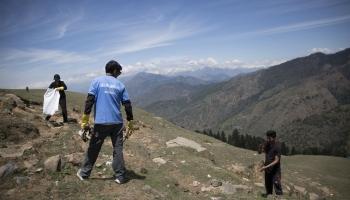