That is how  Abdullah Sarwari describes the moment he departed Indonesia for Canada.

“I was leaving all these memories, all these good people, and all these experiences behind, at a place that has given me so much… and at the same time taken away so much from me,” he says.

Spending years of his life in limbo as a refugee is something Abdullah is painfully familiar with.

“[But] instead of cursing the darkness, my older sister and I decided to light a candle, and become active members of our community,” he says.

When Our Better World (OBW) first told Refugee Learning Center’s (RLC's) story in June 2019, Abdullah was helming the initiative he co-founded in 2015 as its principal. Run by refugees, for refugees, RLC is an educational space providing free classes to refugee children and adults.

The centre became a lifeline not just for the community, but for Abdullah and his fellow volunteers. Stranded while awaiting resettlement, many fall into hopelessness and are vulnerable to mental health issues.

RLC’s classes are an empowering antidote to this helplessness, allowing students and volunteers to use their abilities in a meaningful way. They also prepare refugees for a fresh start in their resettlement countries.

For Abdullah, that dream has come true. Last November, he and his family resettled in Vancouver, Canada.

From braving the first chill of winter, to having his own bank account, the months since have been life-transforming. After a three-week stay at a welcome centre, Abdullah and his family have moved into their new home.

“Within two weeks, we have access to more facilities, resources and rights than we had in Indonesia,” Abdullah says.

In Indonesia, the baton has passed to new principal Sikandar Ali, who served as RLC’s IT manager since its beginnings.

“I hope that we will do our best for the future,” Sikandar says.

RLC now has over 300 students, ranging in age from six to 60 years old. Leading the charge for awareness and advocacy for a transitory community often forgotten, the centre has become a success story. 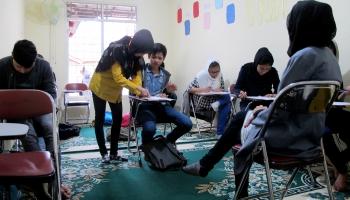 After OBW told the story of RLC as part of its Refugee Series, offers to help streamed in with 276 volunteers signing up to teach or contribute their skills. It was the most the centre ever saw.

“We used to receive almost no volunteer sign-ups. But by the end of the [OBW] campaign we had more than 100 sign-ups,” Abdullah says.

“That was very surprising, and it made us feel amazing.”

The centre was also able to achieve their fundraising goal of US$6,600 and meet their crowdfunding target to fund one year of rent and expenses. Such donations help ensure the sustainability of RLC,  which began operations with scarce resources the team scraped together —  the centre did not even have a bell.

The duty of informing teachers that each class was over fell on Abdullah. A trivial responsibility to most, but a simple act that gave him newfound purpose.

Today, he’s proud to tell anyone that his maiden task at RLC was to be the school bell.

“Yes,” Abdullah laughs. “Not ring the bell, but be the bell.”

“We have an electric bell now,” he happily updates.

Like Abdullah, Sikandar is from the Afghan tribe of Hazara. Sharing a familiar story of persecution, he fled ethnic and religious conflict in Karachi, Pakistan, arriving in Indonesia six years ago. Separated from his family, in a foreign country without basic rights, he spent his first year alone and directionless.

“I faced many problems. I stayed at home all day without going outside,” he recalls.

A friend introduced Sikandar to Abdullah, who told him about the RLC and how he could contribute his knowledge and skills. Having completed IT and computer courses in Pakistan, Sikandar leapt at the chance to volunteer.

“I was doing nothing except eat and sleep. I wanted to do something active in the community,” he says.

Preparations for the new school year are underway, and Sikandar and his team are busy drawing up lesson plans and timetables.

Besides core classes like English and Bahasa Indonesia, and continuing the  GED (General Education Development) Programme, the centre also started basic computer classes for children and youth. “Some don’t even know how to turn the laptop on,” Sikandar says.

Students are taught basic IT and word processing skills. Working off donated laptops, up to three students share one device. The course is showing good progress, with plans to expand into areas like programming and Internet safety — once there is volunteer support.

Carpentry workshops are also on the wishlist when funding permits. Students will gain skills while staying productive, making furniture for the classrooms.

The team is reviewing the volunteers who signed up after watching OBW’s story. They will reach out to those with skill sets RLC needs.

Faced with an uncertain future himself, Sikandar holds out hope of resettling in a country permanently. For now, his work at RLC keeps him going.

“I’m doing my best for the community, the children’s future. It makes me happy that I can do something for humanity,” he says.

“Maybe I cannot continue my studies, but [the children] will be [able] to continue their studies when they arrive in their second or third country. This is the one thing that motivates me.”

For Abdullah, the tide has turned on a life marked with adversity — from UNHCR offering him a job as an interpreter, to TEDx inviting him to speak in Ubud, to his resettlement in Canada.

“It proved to me that if you want something, there’s nothing that’s impossible,” he says.

Despite being resettled thousands of miles away, Abdullah continues to play an advisory role at RLC. When asked about his hopes for the centre's future, Abdullah’s answer is bold and unexpected.

“It is my hope that there are no more refugees, and no more need of RLC or other refugee-led schools,” he says.

Meanwhile, he hopes RLC continues to provide free education to those who need it, for as long as possible.

“At the end of the day, our lives can be similar to yours,” Abdullah says.

“All we need is the chance, the opportunity, to prove who we are, and what we can do.”

Refugee Learning Center is a school set up by refugees, for refugees. Based in Puncak, Indonesia, the school is run by refugee volunteers, and offers basic education classes for children and youth, and skills classes for adults. From just 35 students at its inception, it now has over 300 refugee students as of January 2020.

DonateDonate cash to RLC, so that they can continue to provide education and support to refugees.
DonateDonate in kind to Refugee Learning Center
View all actions (3)

Here are ways you can help Refugee Learning Center

Donate cash to RLC, so that they can continue to provide education and support to refugees.

Have skills and ready to share them with refugee children and adults? Volunteer for RLC and help enrich their lives.

Not your ordinary superwomen

The age of innocence

Lost her voice and found her song