Lost her voice and found her song

Crystal thought she’d lost it forever. What the singer did in response made her stop seeing herself as a victim.

I stepped onto the compound of an at-risk community and was greeted by a youth who, with a slight grin, threw a challenge at me: "Why are you here? Go home lah."

My team and I returned every week - for six months.

These were youths who had been sent there by the government, the courts or welfare organisations, for rehabilitation.

But they had committed more offences than the ones they had been charged with – they were guilty of accepting the negative labels that had been stuck to them for years.

They knew the art of self-stigmatisation and had grown tired of wondering if they would ever be useful to society.

When I battled the crisis of losing my voice for two years – without knowing if I would ever regain it – I received huge doses of empathy, belief and hope.

I wanted to convey these things to the youths and was convinced that being vulnerable was crucial.

So in our first few interactions, our group of volunteers took time to share our fears, regrets and crises, and invited the youths to share theirs with us.

In this common space of brokenness and vulnerability, the walls between us and them started to crumble and the ground softened.

We wanted to nurture growth and open new pathways to their dreams, and we wondered if music and storytelling could help.

Could the reflective and creative process teach us how to make better judgements about ourselves and others? Was it true that we saw ourselves through others' eyes?

After weeks of music and storytelling training, we held a mini showcase and installation, hoping to find answers.

The youths performed their songs to huge applause.

We invited the public to write their responses at the installation, most of which were positive and generous in belief.

We brought the notes back to the youths, expecting smiles all around, but they were mostly met with scepticism.

One of the youths shared that there was no reason for her to trust the responses because she did not have a relationship with the audience. Another youth suspected that the responses had been rigged.

That evening, we learnt that trust was needed to convey belief and hope.

We decided to stage our next performance very differently.

This time, we invited more of the youths' loved ones and friends and inserted an audience-interaction activity in the middle of the show, so that they would have full view of how the audience responded to their songs and stories.

We held it at The Arts House – an "extravagance" that was intentional.

We wanted the youth to know that we saw potential in them and that they were worthy of the best facilities.

After six months of crafting songs and stories out of their aspirations to overcome adversity, it was time to unveil these vulnerable journeys to their loved ones.

It was to be a glorious milestone, meant to be burned into their minds for life.

With excitement, we returned to the residence to hold a few more practices. To my dismay, I learnt that one of the lead singers had committed a grave error and might not continue living at the residence, let alone sing at the performance.

Later on, we learnt that she had fallen back into a drug addiction and faced the possibility of incarceration.

I had been hopeful that she would eventually leave the residence to start life afresh. Now, it seemed that she was possibly leaving for prison.

We decided to carry on practising with her; there would be no replacement.

She shared with me her fears and regrets. We prayed for a second chance; that she would not be imprisoned.

The day for the final performance came. Our prayer was answered and she was given a second chance.

That evening, she sang more beautifully than I had ever heard her sing.

The song was about love, but what I heard her spirit sing was about treasuring second chances.

I hope she continues to treasure life.

As I listened to the youths sing of courage and hope, I felt privileged to have learnt many things from them:

Sometimes it takes an ocean of belief to peel away years of negative labelling. It takes time for such a person to believe in his or her worth.

Trust has to be earned. If we persevere, we might taste the fruit of our labour.

At the performance, a mother shared that while she had spent money to pay off her daughter's debt, she felt she had won back her daughter's life in return.

A youth shared that she was working hard to regain her mother's trust.

In that instant, I saw myself less as someone who had lost her voice, but someone who was able to "give voice" to others – something I had not planned.

It was empowering and dignifying.

Vulnerability opened me up to empathy and eventually to empowerment.

And to think, this all began with a story of brokenness.

Crystal works through Diamonds on the Street, a Singapore arts collective, to empower marginalised communities and individuals to express themselves through music, stories and performances, in the belief that they can turn their wounded histories into stories of hope.

You can help them by inviting them to share their music and stories at events and in schools, or buy their music. Proceeds go to empowering more communities.

About Diamonds on the Street

Diamonds on the Street works with struggling individuals and communities to help them overcome their challenges, through music, stories and performances. Founded by singer-songwriter Crystal Goh after she was diagnosed with Spasmodic Dysphonia, the group believes in using hope to heal.

Here are ways you can help Diamonds on the Street

Invite Diamonds On The Street to share their music and stories 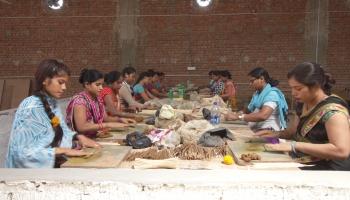