Grant Pereira is one of Southeast Asia’s most prominent conservationists, who has been working in wildlife and environmental conservation for over 40 years.

The 71-year-old Singaporean can still be found organising mangrove replanting programmes in Singapore. That's when he is not serving on the International Board of Advisors of Sea Shepherd Conservation Society, as director of reforestation at Thailand’s Elephant Nature Park, or bringing students on regional volunteer expeditions and heading the Green Volunteers Network.

Grant spoke with Our Better World, to share his thoughts on why volunteering for wildlife conservation is good for his soul.

OBW: Hi Grant, tell us how and why you got into wildlife conservation?

GRANT: I can’t recall how I got into it, but I had a thing about seeing birds in cages during my teenage years. Whenever I saw a bird caged, I would try and help it escape! Haha!

I was always up for an adventure. I travelled to have fun in areas like Endau Rompin and Pahang National Park. I saw plenty of wildlife – snakes, hornbills, monkeys, wild boars. I became friends with Orang Asli, who even gave me a house to live in, in Bekok, Johor.

I made friends with a lot of indigenous communities around Asia, and have seen them hunt wildlife for food. That’s ok, as that’s what they have done for centuries to get their food. But then I saw a change.

The locals who used to maybe catch one pangolin to feed their family, were now being paid what was to them, big money, to catch 1,000 pangolins by middlemen who supply to restaurants. It made me very sad.

I don’t think anybody grows up with the intention of becoming a poacher, but when faced with hardship and a quick buck that would help his family, I get it. But what I will not accept is the situation they and wildlife are being put in.

I started working and volunteering in wildlife and environmental causes around the region, and Thailand had a special place in my heart because of its elephants.

Elephants are my first love. They are very gentle, intelligent animals. There weren’t laws back then that protected elephants.

When I came across stories of elephants in Indochina that had either been killed or lost their limbs after stepping on landmines, I was very affected.

So I started volunteering with Friends of the Asian Elephant, and the Elephant Conservation Centre in Chiang Mai, Thailand, and helped to look after Motala, an elephant who had stepped on a landmine along the Burmese border around the mid-90s’. I spent six months helping to clean her wounds and nursing her back to health, along with other elephants who were impacted. She was eventually fitted with a prosthetic limb, which helped her to be mobile, so I’m really glad about that. 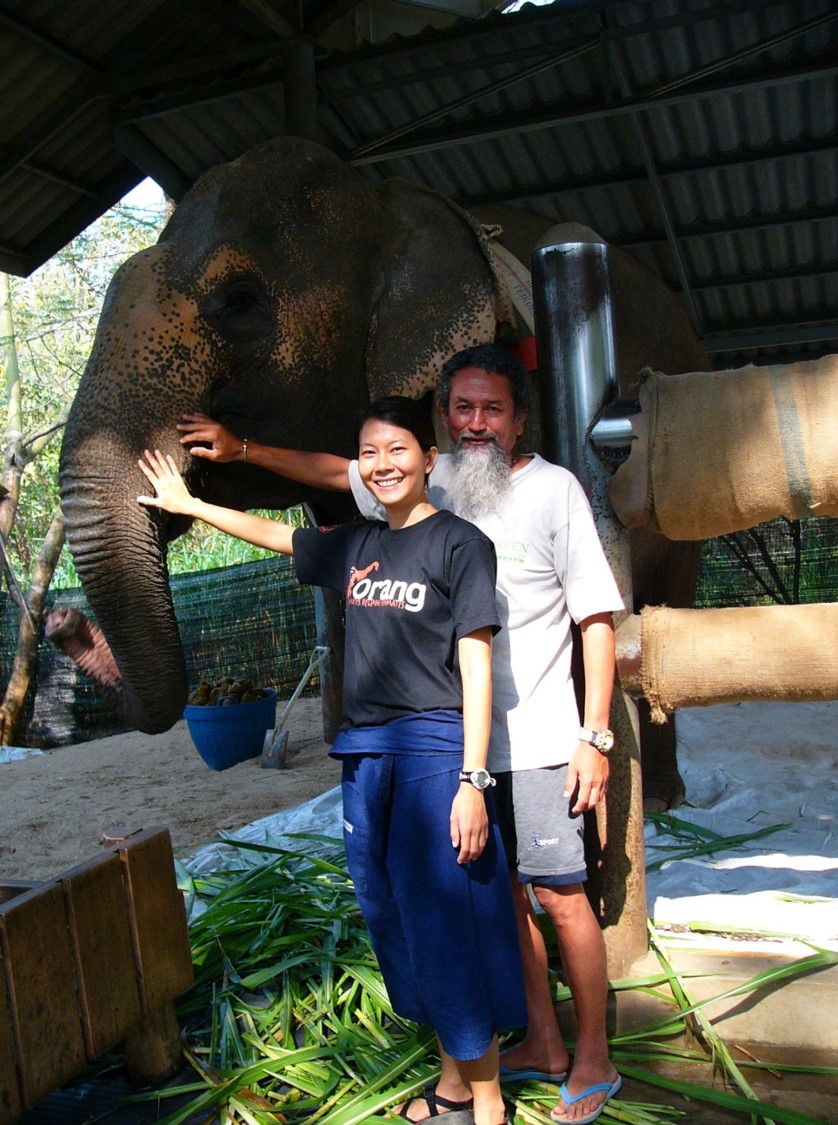 OBW: What is one of the craziest stories from your conservation days?

GRANT: In Chiang Mai, after the high season, I walked with the mahoots back to the Burmese border. It took us nine days. We slept during the day to avoid the heat, and walked at night. All that we brought with us was rice, chilli padi and salt; everything else we got from the forest.

OBW: What was the biggest struggle you came across when it came to volunteering for wildlife conservation?

GRANT: It was getting people to care about wildlife. So many people came to me and said, ‘There are so many poor people that need help. Why do you want to help animals?’ So I said that there are more people who help people, and not many who help wildlife. I wanted to be of help to the lives that really needed it but couldn’t ask. This was more about getting people to understand my stand, but it was much harder to get them to empathise with the issue and make a difference.

A lot of people my age were kampung kids, who would have very likely eaten wildlife from the forest. So telling them, 'Hey, we should be protecting wildlife,’ doesn't make a dent.

As the saying goes, ‘Old dogs can’t learn new tricks’. But I refused to stop, and kept pushing for more people to change and to volunteer in supporting wildlife. Along the way I kept meeting more younger people, who were more attuned with the world around them.

Now there are many more specialised NGOs led by younger people who are working hard to save wildlife, and I’m so very excited. The younger generation are the ones who will make the difference, and they have the power to bring the world, humans and wildlife to a better place.

OBW: What was one of the high points during your wildlife volunteering days?

GRANT: I teamed up with Sea Shepherd, ACRES [Animal Concerns Research & Education Society], PETA [People for the Ethical Treatment of Animals] and many others to stop Resorts World Sentosa from bringing a whale shark to Singapore for the aquarium. At around 15m, the whale shark is the biggest fish in the sea, which travels long distances in a day, and it would be cruel to keep one confined in a fish tank no matter how big it might be. We did a huge nationwide campaign, as well as petitions, and as the word got out, media coverage became huge. And due to public pressure, Resorts World decided not to bring the whale shark here. That was a huge win for wildlife and for me, but it was just one battle won. We still had and still have, lots more to fight for.

On another personal note, during the heydays of local weddings serving shark fin soup, a friend and myself managed to convince local actress Zoe Tay to not serve shark fin during her wedding. She said, 'yes'. That started the ball rolling, and other celebrities started joining in the No Shark Fin movement. Soon hotels joined in. Eventually even Singapore Airlines stopped serving shark fin. What a win! OBW: Why should people volunteer?

GRANT: When we are young, our parents teach us to share. Volunteering is part of that sharing culture. I think it’s our moral responsibility. We all want a better planet, a better earth. We can’t wait for the next person to do it, we can’t wait for the government to make laws, but we can all make a difference using our own two hands.

OBW: What does volunteering help to do for wildlife conservation?

GRANT: Wildlife conservation NGOs are filled with people who have plenty of heart, but sadly lack the support and funds needed to make a difference for an ever-growing community of wildlife that are under threat. Your support through volunteering can make a big difference. It helps you feel good – from helping animals to helping the planet. Helping wildlife is important to keep ecosystems healthy, which is critical for human life. It also keeps this world in a better place for future generations.

Volunteering will help you learn something unique about the world around you, and in turn about yourself as well. You, me, wildlife, we are neighbours on this planet we share.

OBW: How can people volunteer? GRANT: There are so many NGOs in need of help all over Asia. You just have to go online and you will find NGOs in your neck of the woods. In Singapore, organisations like Green Volunteers, ACRES and others need your help. No action is too small. You don’t have to be in the jungle trekking for three days; you could help come up with and write campaigns from your own computer chair. You can come and join me in my beach and mangrove clean-ups, or biodiversity garden. Keeping the environment clean and green is the first step in helping to protect the habitat of wildlife, and this also helps us to have a healthy eco-system that all life relies on.

GRANT: Why do I need to stop? As long as I can walk, I will choose to live a life that has meaning. And I find meaning in helping wildlife and the environment. OBW: What are your hopes for the future of wildlife conservation?

GRANT: In Singapore, I hope we stop the shark fin market. I hope more volunteers will rise up and help wildlife and environmental causes. I hope our school children can be given 30 minutes a week to learn about wildlife and the environment as part of their curriculum.

Personally, I hope my granddaughter grows up to be a vet, and I would like to leave a world filled with animals for her that she can fall in love with and help to protect.

We appreciate your feedback in this 3min survey, it’ll help us do better.

Ask me anything: A wild Q&A with Louis Ng

Walk on the wild side

TCM - good for you and good for wildlife

Volunteer at the Bornean Sun Bear Conservation Centre where you will play a role in sun bear rehabilitation and wildlife education. Choose from the 14-day or 28-day programme.

Take Survey
How You Can Help